Last week I traveled to the Excellence Riviera Cancun adults-only resort located in Mexico for a few days of relaxation with my wife.

The Excellence Resorts are known for their luxury all-inclusive experience, and the Riviera Cancun location definitely did not disappoint.

If you're on the edge about whether this resort is for you, keep readin!

In this Excellence Riviera Cancun review, I'll help you decide if it's worth the money, things you'll want to consider, and much more! Let's get started! 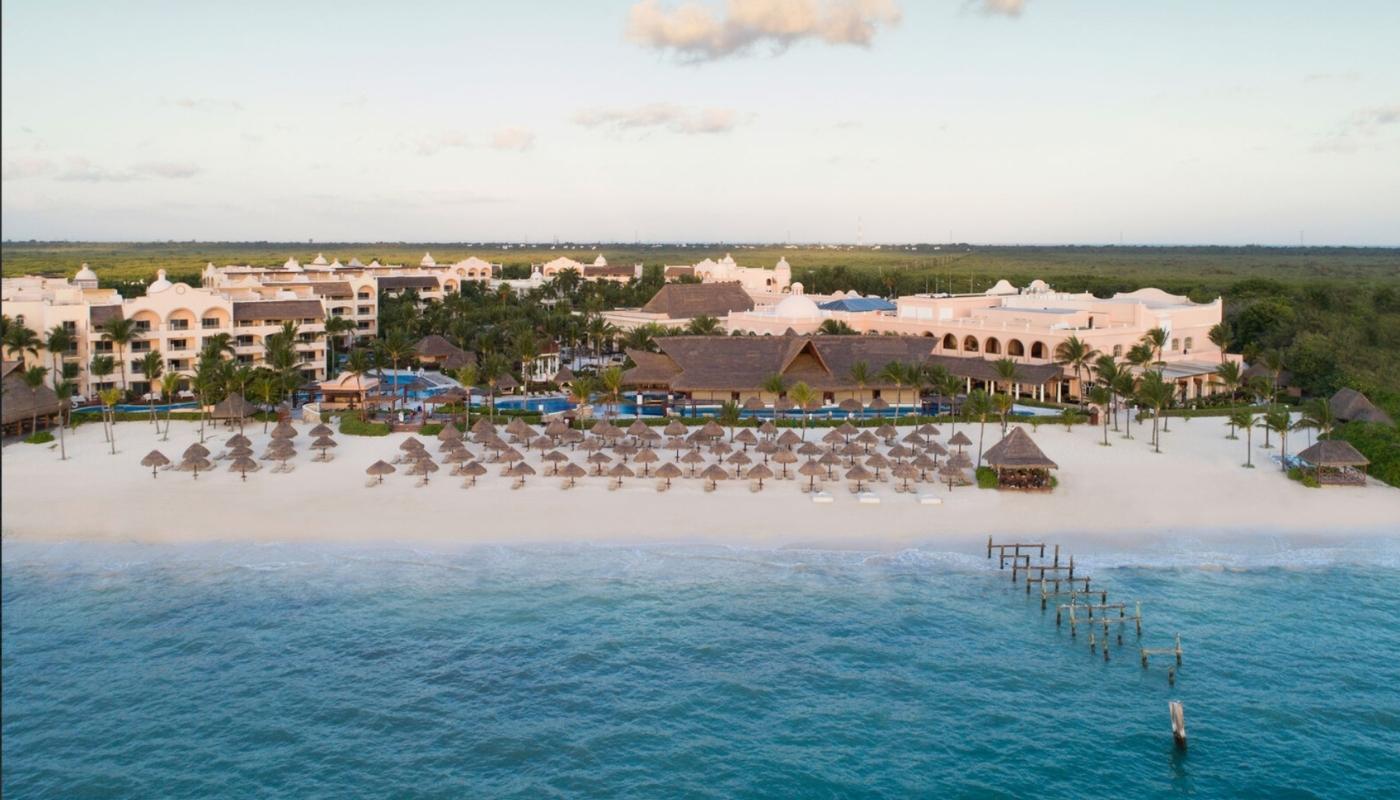 This was my second visit to an Excellence resort, with the first being my honeymoon at the Excellence Oyster Bay in Jamaica in 2021.

Because we had leftover airline credits from COVID, we needed to go somewhere and we enjoyed the Excellence Montego Bay resort so much, we decided to try the Riviera Cancun resort.

The Excellence Riviera Cancun is a luxury resort that's adults-only (18 years and older), all-inclusive, and located about 20 minutes from the Cancun airport.

The resort is expansive with large pools, 11 restaurants, 10 bars, a spa, a fitness center, and a plethora of beach and pool loungers.

While this is promoted as a benefit, the check-in process was very lengthy as there were several other couples checking in at the same time.

After a long flight and travel, this wasn't exactly the experience we wanted.

However, we were offered drinks and snacks at the bar, which was nice.

Our specific room was located on the second floor. The room was large with a nice bar, and decent size balcony.

However, there were a few things we didn't like:

Here was a look at our balcony and view. 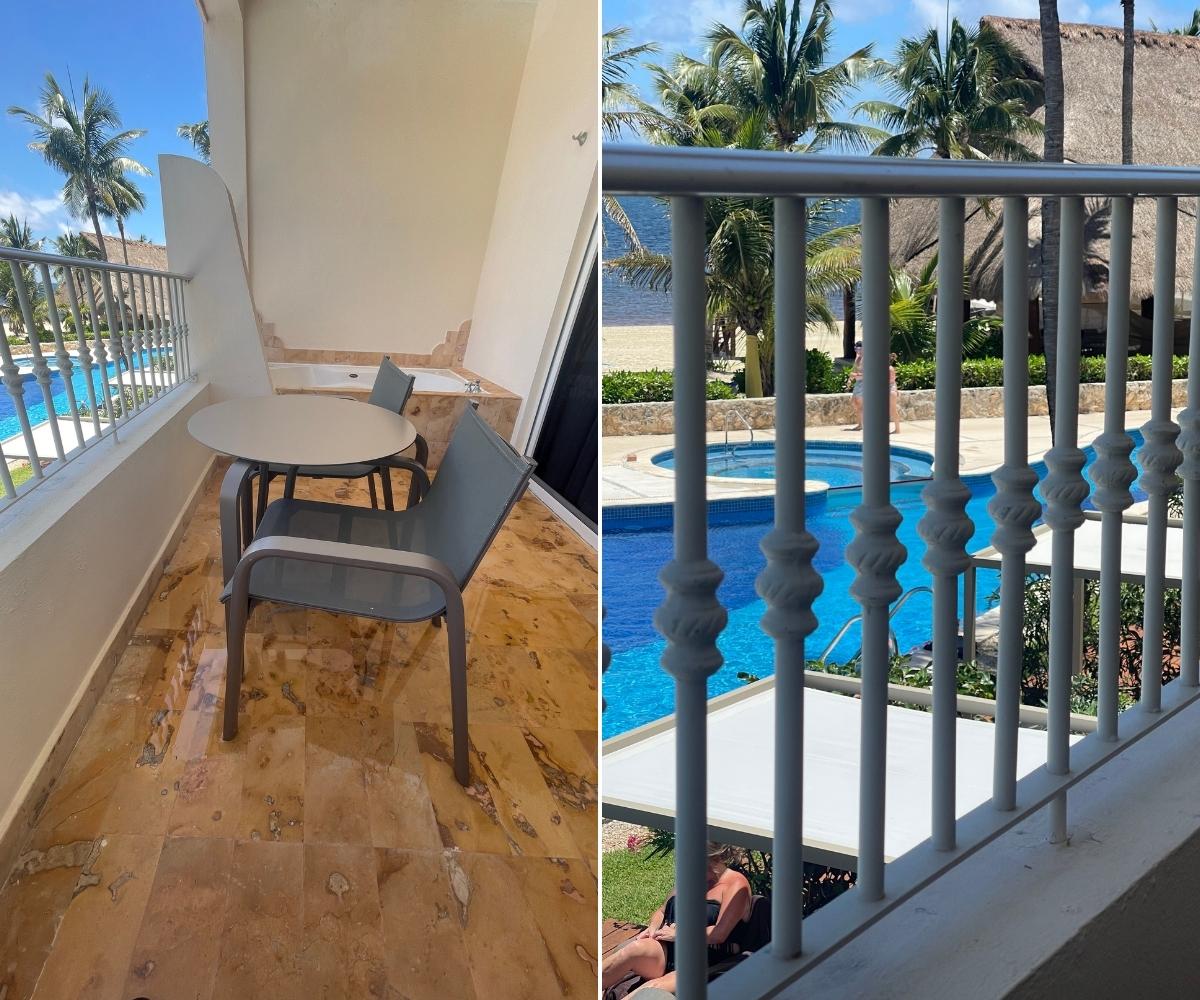 We heard other guests that weren't overly pleased with their rooms either.

Overall, the room was fine, nothing to harp on – but also not terrible.

The service at the Excellence Riviera Cancun was tremendous.

After being delayed one day after missing a flight, our accommodations were available when we arrived the following day without any issues.

When relaxing by the pool, staff were always around asking if there was anything we needed and regularly brought us drinks and prepped our chairs with towels.

The service at restaurants was also great, with only one case of having to wait a decent amount of time for our food. 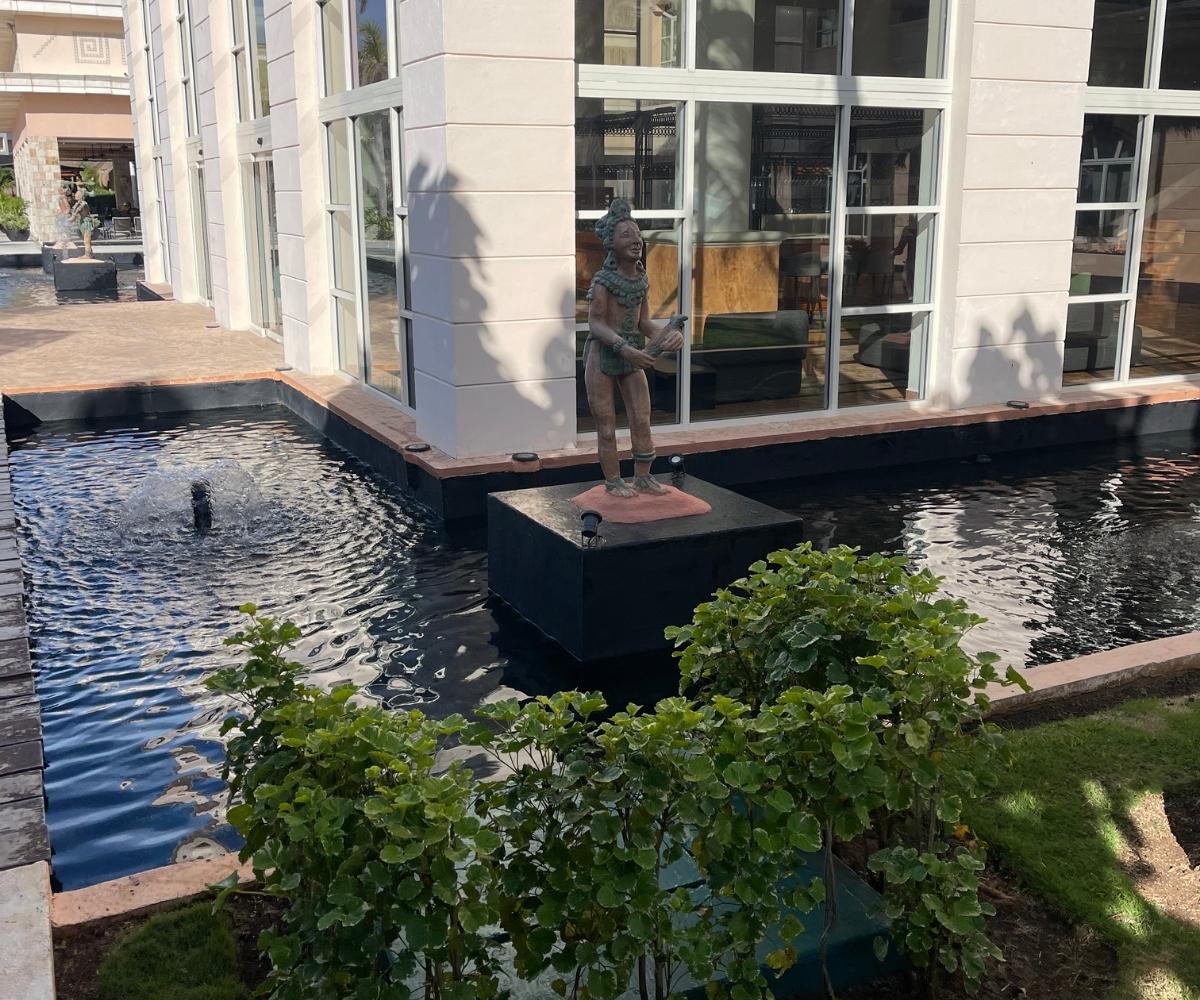 We had high expectations when it came to the food in Mexico. We were expecting a large variety of Mexican food, but unfortunately, this wasn't the case.

Ultimately, the food was fine. Not great, but also not terrible.

We visited the Agave restaurant our first night, which is the resort's landmark Mexican restaurant, and ordered a burrito that was mild and without a ton of flavor.

The appetizer we got was quite literally melted cheese, instead of the queso we thought we had ordered.

It's also worth noting that the portions are small, but you can always ask for more so it's not a big deal.

The best restaurant we visited over 5 days at the resort was the Asian restaurant, Spice. The Grill also had great steaks, so if you're into that – we'd recommend it.

Everything from the appetizer we got to our main dish were all outstanding.

The biggest disappointment in the food was breakfast.

With only 2 restaurants open for breakfast (non of which are Excellence Club exclusive), both places felt crowded. We ultimately preferred the Lobster House over the Kitchen Table because of the service offered, instead of the buffet style that the Kitchen Table offered. 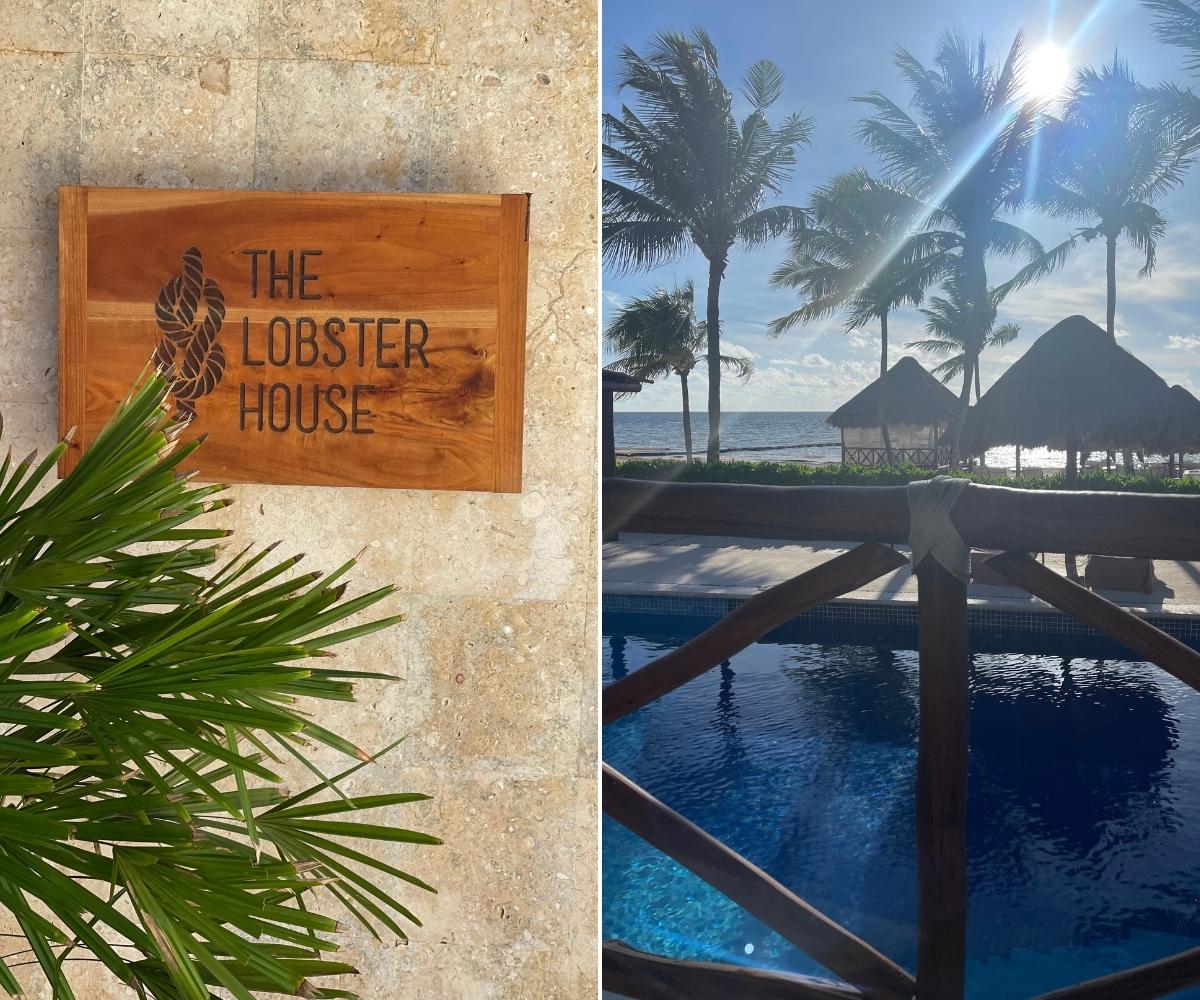 The view at the Lobster House wasn't bad!

The Excellence Riviera Cancun has a large lazy river that was extremely popular.

Ultimately, because we were in the Excellence Club and wanted to take advantage of the top-shelf liquor, we only used the lazy river once. Finding a float seemed to be difficult, so we ended up not using them.

The other pools were smaller, but preferred because of the bars.

With the number of people staying at the resort, there did not seem to be enough chairs and loungers for guests. Numerous times we witnessed people “holding” chairs in the morning so they could have them in the afternoon.

The pools also seemed very crowded for the number of people there.

Compared to Oyster Bay, there was much less privacy in the pools and you felt as if someone was bumping into you.

The tiki huts at the beach were awesome!

The beach was beautiful and cleaned every morning to remove seaweed.

With that said, the seaweed was a problem in the water and the smell was awful.

The chairs on the beach were plentiful and with the breeze, it felt amazing despite the weather being 90 degrees and hotter everyday.

The water was not very clear due to the seaweed, so we didn't end up getting in the water very much.

Staff were extremely attentive while sitting on the beach and regularly brought us drinks and food.

The nighttime entertainment was great. They had a number of different shows located at the theater in the resort.

One night they had a band playing live music, the next they had a fire show, so there was something for everyone when it came to the entertainment.

They also had a variety of activities during the day.

Beach volleyball, yoga, and other activities were held throughout the week with a few activities a day.

Because of where our room was located, we could watch the daily game of volleyball in the pool.

While we chose not to go on any excursions, they had plenty to offer for the more adventurous travelers.

Some of the paid excursions and activities you could participate in included:

I didn't check the prices of these because we ended up not doing them, but I can imagine they were not cheap.

The resort offers several amenities that some people may find useful while others won't.

As someone who likes to stay active on vacation, I used the fitness center. It was fairly large and clean.

They also have a spa on site that some people use. The prices at the spa seemed a little outrageous, but that was expected. For a couples massage, be prepared to shell out at least $250 plus tip.

Because we were in the Excellence Club, we also received Bvlgari soaps and lotions in our room which is a nice touch.

We paid around $400 per night for our stay at the Excellence Riviera Cancun.

Considering it's all-inclusive, I think this was a very fair price for our stay.

We could have opted for an even cheaper room by choosing a pool front suite instead of ocean front and removing the Excellence Club would have saved us even more.

Excellence Resorts do not offer straws! This means if you get a frozen drink, they can be difficult to consume. We brought our own Yeti Cups with straws and the bartenders are happy to fill them up for you.

Is the Excellence Club Worth it?

One of the biggest questions you might be asking before you travel to any Excellence Resort is “is the Excellence Club worth it?”.

We have been in the Excellence Club on both of our trips and have felt it was worth it.

The private transfer alone was a huge benefit for us after spending a day traveling. Instead of being packed into a bus, we were transported privately in a clean Chevy Suburban where we were offered water on our ride to the resort.

Depending on what you plan to drink, the top-shelf liquor could be worth it for you. Because I primarily drank vodka and cranberry juice, having Grey Goose available was nice.

If you plan to do a lot of drinking, choosing Excellence Club could be worth it for this reason alone.

By booking Excellence Club, you can also choose to pay 30-days prior to your stay, instead of the day you book. You also get more flexibility if you need to cancel or modify your stay.

While this didn't make much of a difference for us, for some travelers, it could.

Ultimately, the Excellence Riviera Cancun is a great all-inclusive resort for people who want to relax and be pampered on their trip without children around.

While we weren't overly impressed with the food or pools – there were many great aspects of this resort like the top-shelf liquor and excellent service.

Compared to the Excellence Oyster Bay, Riviera Cancun was not quite as nice, but we still enjoyed this trip.

Forrest is a passionate traveler who loves to explore different cultures and lifestyles.