9 Unique Things To Do In Astoria, Oregon

9 Unique Things To Do In Astoria, Oregon

Astoria, Oregon is a sleepy little town on the Pacific Ocean in northern Oregon.

Classic Victorian-era homes dot the hillsides, looking over the town and waterfront.

This port town is full of history, hollywood fame, museums, great food, and so much more.

Plus, it’s bordered by some of the most beautiful natural areas in the United States! Let’s learn more!

Don't have time to read now? Save to your Pinterest for later:

Astoria is a beautiful town on the coast of Oregon. This classic Pacific Northwest town is right on the banks of the Columbia River that divides Oregon and Washington.

Most people know of Astoria from the famous 1985 movie, The Goonies.

What you might not know is that Astoria is actually the oldest city in the entire state! And, it was the first American settlement west of the Rocky mountains.

If you want ideal weather, visit Astoria between the months of June and September. If the classic drizzly days of a PNW winter don’t bother you, then come any other time! There are less tourists in the off-season, so if that’s your thing, winter is a great time to visit Astoria.

The Best Things To Do In Astoria

Whether you’re coming to Astoria on a Goonies inspired vacation, as a stop on your road trip, or a romantic getaway, you won’t be disappointed.

Explore Astoria Shops, Restaurants, and Views Along the Astoria Riverwalk

Astoria has so many shops and restaurants that it’s easy to spend an entire day or more meandering along the historic streets.

And you can’t miss the gigantic 4.1 mile long Astoria bridge. This bridge is insane! I drove a 36ft motorhome over that bridge more than once and although I couldn’t take my eyes off the road, I’m sure the views were incredible.

Like I mentioned, Astoria is the oldest city in Oregon, and the first American settlement west of the Rockies. This town has some history!

Downtown Astoria has shopping, eating, and so much exploring in store. Take in the architecture and vibe of the city, or just browse antique stores and get a bite to eat.

You can’t stay in the Pacific Northwest without getting a locally roasted coffee. Plus, coffee shops just scream PNW vibes.

My personal favorite coffee shop in Astoria is the Columbia River Coffee Roasters. This place has amazing coffee and snacks and great wifi!

I hung out at this coffee shop quite a bit during my time in Astoria. When you work from the road, coffee shops are a lifesaver.

The Astoria Column is definitely one of the most unique things to do and see in Astoria.

The Column rises above the sleepy village with stunning 360 degree views. The best part? You can throw a glider off the top and watch it fly down!

The column is a monument to the history and riches of the Pacific Northwest region, and is covered in artwork depicting such history. The Astoria Column is a historical legacy and a must-see.

There are so many great museums in Astoria and I couldn’t list just one! Here’s a bit about each museum:

This museum is in a beautiful 11,600 sq ft Queen Anne Victorian home.

It was the home of Captain George Flavel and his family. Captain Flavel was a prominent Astoria businessman as well as a bar pilot on the Columbia River.

The museum has been restored to portray the elegance of the Victorian period and the history of the family.

You already know no visit to Astoria is complete without a visit to the Oregon Film Museum!

This museum is housed in the old Clatsop County Jail, which was also used to film the famous jail break scene in The Goonies.

This museum isn’t just about The Goonies, though. Oregon has a lot of Hollywood history, and so does Astoria!

It’s even earned the nickname “The Graveyard of the Pacific” due to the shipwrecks and the lives lost.

A visit to this museum will leave you with a great appreciation for the area and the people who have made their lives here for the past 200 years.

The Museum of Whimsy

Last but not least on the list of must-see museums in Astoria is the Museum of Whimsy. This museum is in downtown Astoria in an old 1920’s bank building, and it’s like nothing you’ve ever seen before!

If you’re a purveyor of whimsy or just like quirky things, check it out.

Goonies fans are already on this – taking a Goonies themed sightseeing tour of Astoria, Oregon! Goonies never say die – and many of the famed filming locations live on in this charming little coastal town.

Some of the locations have already been mentioned, like the Flavel House Museum and the Oregon Film Museum. Other Goonies-famed places in Astoria include:

And so much more! Astoria is home to the houses from the movie, as well, but I won’t be noting those here.

The houses are privately owned, many on dead-end drives. The owners are tired of being bombarded by tourists… so it’s best to avoid them!

Check out a Real Shipwreck

The wreck of the 4-masted ship, the Peter Iredale, lies on a beach 8 miles away from Astoria.

The ship ran aground on October 25, 1906, and was left to rot. This ship is just one of many victims of the Columbia River Bar – and it’s inhabitants were lucky ones.

The best time to see the shipwreck of the Peter Iredale is at low tide, so you can walk right up to it. Check out the tide charts here.

If you can catch it at low tide AND sunset, do it! It’s the perfect place to watch a Pacific Northwest sunset.

Drive Out to the Famous Cannon Beach

Because of the film The Goonies, most people assume Astoria is on Cannon Beach, but it’s actually about 20 minutes away.

Cannon Beach is home to the famous Haystack Rock from The Goonies movie, which has become an iconic coastal Oregon landmark.

Cannon Beach isn’t just a beach, it’s a cute little coastal town, too! Check out the best things to do in Cannon Beach here.

Just 6 miles away from the town of Astoria is the Lewis and Clark National Historic Park. This park is a step back in time where you can explore Fort Clatsop, attend a re-enactment, and so much more.

Fort Clatsop was the encampment for the Lewis and Clark expedition during the winter of 1805 – 1806.

The Lewis and Clark National Historic Park is one of the best things to do in Astoria with kids – it’s as fun as it is educational!

Where To Stay In Astoria, Oregon

There are plenty of places to stay in Astoria, Oregon. Whether you’re looking for a romantic getaway, a hotel, an RV park, or something else, you’ll find it!

If you want a unique stay and to experience Astoria like a local, check out the listings on AirBnB. You might even find a houseboat!

Are you looking for a hotel in Astoria? You’ll find plenty of those, too! For a unique Astoria hotel experience, check out Cannery Pier Hotel and Spa, located on a pier in the river with incredible water and bridge views.If you’re RVing or tent camping, you’ll find an assortment of RV parks and state parks in the surrounding area! Take a look at the listings on Campendium here.

Carrie has a passion for location independence and nomadic lifestyles. After traveling full-time in an RV and living the van life, she created Making Money and Traveling to help others make the switch to a remote lifestyle. Learn more about Carrie on the About page or connect on social media below. 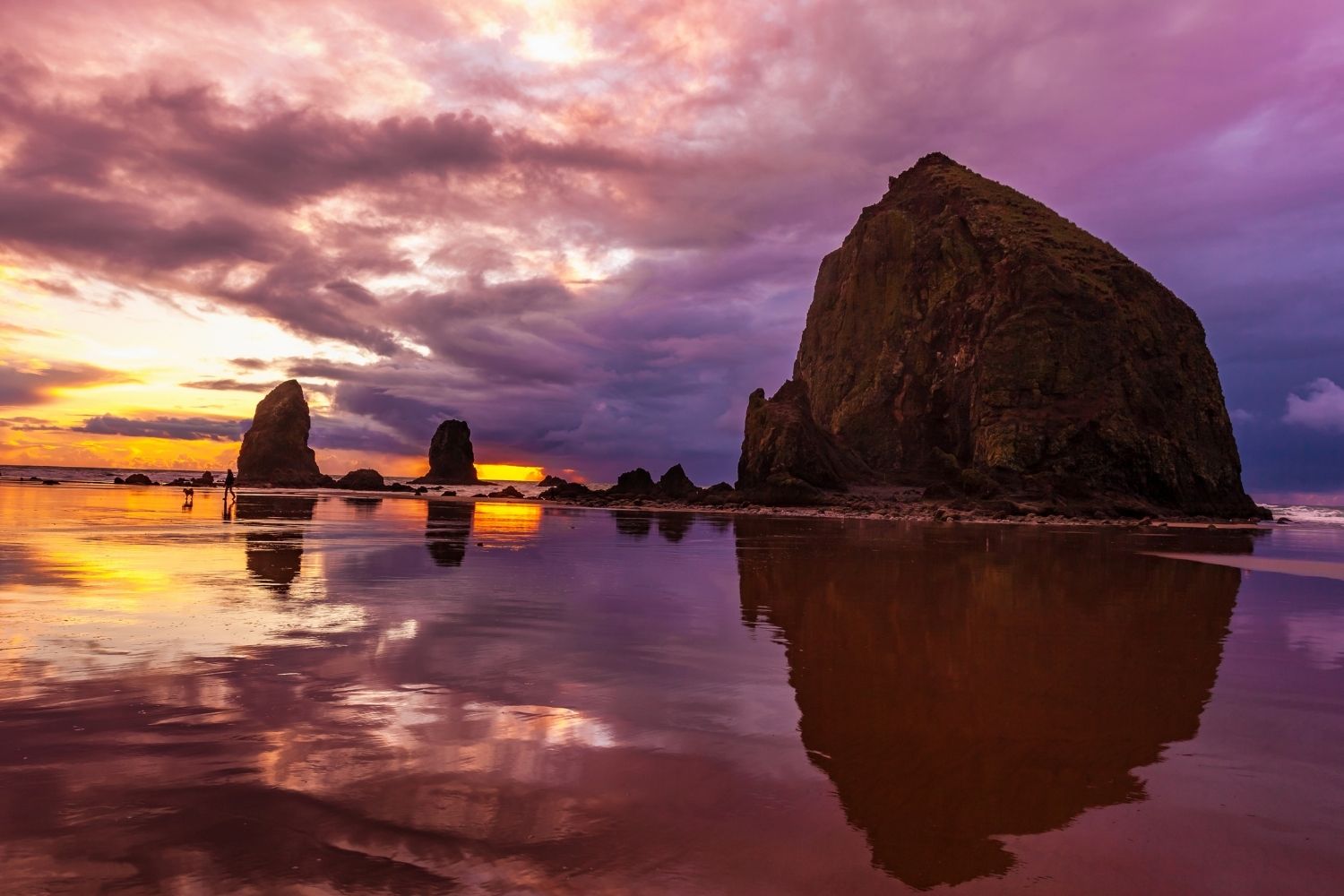 9 Incredible Things To Do In Cannon Beach Oregon

Cannon Beach is an iconic coastal Oregon Destination. Check out the 9 most incredible things to do in Cannon Beach, Oregon here!